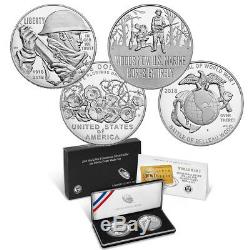 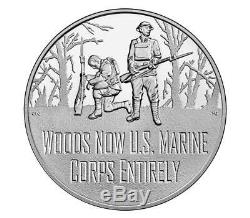 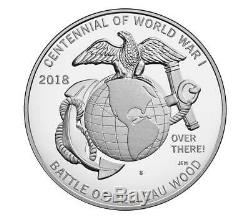 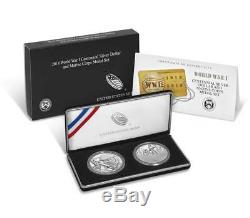 To commemorate the centennial of Americas involvement in World War I and honor the more than 4 million men and women from the United States who served. This set includes a proof silver dollar and a proof silver Marine Corps medal.

These sets are limited to 100,000 units across all five medal product options. Obverse: The obverse (heads) design, titled Soldiers Charge, depicts an almost stone-like soldier gripping a rifle. Barbed wire twines in the lower right hand side of the design. Inscriptions include LIBERTY, 1918, and IN GOD WE TRUST. Reverse: The reverse (tails) design, titled Poppies in the Wire, features abstract poppies mixed in with barbed wire. Inscriptions include ONE DOLLAR, E PLURIBUS UNUM, and UNITED STATES OF AMERICA. Obverse: The obverse design depicts the aftermath of the Battle of Belleau Wood.

One Marine stands guard as the other kneels to pay respect to the fallen. The inscription quotes a report to the American Expeditionary Forces: WOODS NOW U.

Reverse: The reverse design depicts the World War I-era version of the Eagle, Globe, and Anchor emblem. Inscriptions include CENTENNIAL OF WORLD WAR I, 2018, OVER THERE! And BATTLE OF BELLEAU WOOD. Coin Mint and Mint Mark. Medal Mint and Mint Mark.

The item "World War I Centennial 2018 Silver Dollar and Marine Corps Medal Set" is in sale since Tuesday, May 22, 2018. This item is in the category "Coins & Paper Money\Coins\ US\Commemorative\Modern Silver/Clad (1982-Now)". The seller is "patrioticmint" and is located in Cedarhurst, New York.