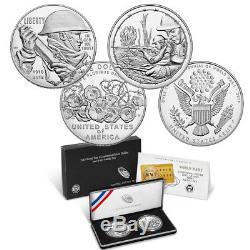 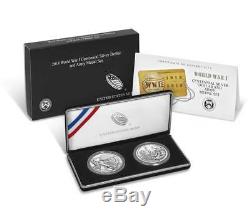 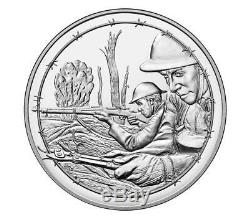 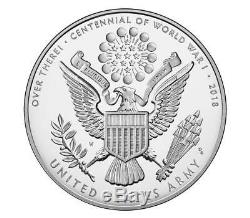 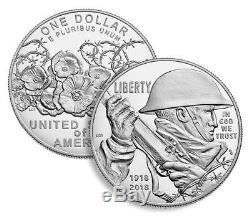 To commemorate the centennial of Americas involvement in World War I and honor the more than 4 million men and women from the United States who served. This set includes a proof silver dollar and a proof silver Army medal. These sets are limited to 100,000 units across all five medal product options. Obverse: The obverse (heads) design, titled Soldiers Charge, depicts an almost stone-like soldier gripping a rifle. Barbed wire twines in the lower right hand side of the design. Inscriptions include LIBERTY, 1918, and IN GOD WE TRUST.

Reverse: The reverse (tails) design, titled Poppies in the Wire, features abstract poppies mixed in with barbed wire. Inscriptions include ONE DOLLAR, E PLURIBUS UNUM, and UNITED STATES OF AMERICA. Obverse: The obverse design depicts a soldier cutting through German barbed wire while a second soldier aims a rifle amid a shattered landscape of broken trees and cratered earth.

A shell explodes in the distance. Reverse: The reverse design depicts the United States Army emblem, which was also in use during World War I. CENTENNIAL OF WORLD WAR I, 2018, and UNITED STATES ARMY. Coin Mint and Mint Mark. Medal Mint and Mint Mark.

The item "World War I Centennial 2018 Silver Dollar and Army Medal Set" is in sale since Tuesday, May 22, 2018. This item is in the category "Coins & Paper Money\Coins\ US\Commemorative\Modern Silver/Clad (1982-Now)".