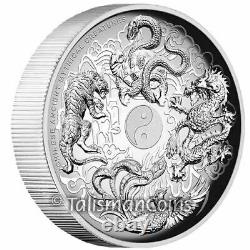 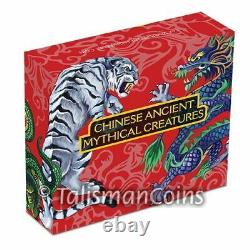 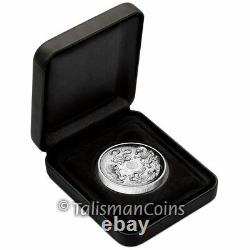 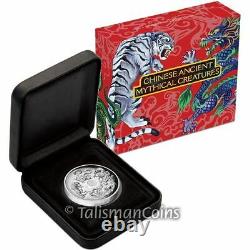 The Yin and Yang symbol in the middle center the images and make the design that much more beguiling! This extremely low mintage one troy ounce pure silver dollar. Will undoubtedly sell out, and quickly! This pure silver dollar gem is struck in ultra high, medallic relief on a concave, extra-thick planchet (it is a piedfort) with a proof finish.

Between the extremely popular Chinese motifs (including both dragon and tiger), beautiful design and limited mintage, heed our advice - get one (or more) of these stunning, one troy ounce, pure silver proofs while you can! According the ancient Chinese mythology, the universe is divided into four quadrants, each representing a season: spring, summer, autumn and winter.

The seasons are divided from each other by the winter and summer solstices, and the autumn and spring equinoxes. These heavenly quadrants are known as the "Four Celestial Palaces", with each palace protected and represented by a guardian animal with a corresponding color, element, and virtue. Yin and Yang represent male and female, as well as completion, perfection and balance! The tiger is the king of all animals and the lord of the mountains. The tiger's color is white, its direction is west, and its element is land, as represented by the mountains in which the tiger prowls.

The tiger is also believed to be the bringer of wealth and a symbol of a good marriage. The tiger protects the Celestial Palace of autumn, representing metal, and is said to be a fierce protector, with the power to exorcise evil spirits and grant a good harvest. The dragon is considered to be the symbol of ultimate power. Although fearsome and frightening, the dragon is also benevolent, just, and the bringer of wealth and good fortune. The dragon's color is blue, its direction is east, and its element is air, represented by the clouds in which the dragon flies.

The auspicious phoenix's appearance is a harbinger of times of good fortune. This mythical bird is symbolic of resurrection and immortality, and is believed to bring happiness and knowledge to people. The phoenix's color is red, its direction is south, and its element fire, as depicted by the flames in which it is consume and then reborn. The tortoise symbolizes longevity, wisdom, knowledge, and fecundity of reproduction. The ancient Chinese believed there were no male tortoises, and so the females were forced to mate with snakes. As a result, the tortoise is commonly portrayed in an embrace with a snake (as on this coin). The tortoise's color is black, its direction is north, and its element water, as represented by the waves in which it swims.

The tortoise is considered to be the god of all the world's oceans, seas, lakes and rivers. Please see the presentation lower on this page for more information about Tuvalu and its association with Australia. This pure silver dollar features the most powerful and auspicious of all the animals in the Chinese Lunar Zodiac - the Dragon and the Tiger the Phoenix and the Turtle aren't exactly chopped liver, either! With its detailed and well-executed design, high relief, precious metal content, auspicious theme and low mintage limit (only 5,000), we expected this gem to sell out quicklyAND SO IT DID!

Don't delay, get this beauty today! Popular with collectors for more than a century, and always hard to find, piedforts are highly sought after. We get asked all the time, What is a piedfort? " There are two different, but related, stories of the origin of the word "piedfort.

The first says that it literally means "strong foot" in French from. The second says this word was appropriated by the mint centuries ago to mean "heavy measure" or "heavy weight". In both cases, the sense of serious heft to the coin is obvious. Often the word "piedfort" is translated as "double-thick", but this is neither a literal translation nor a precisely accurate definition.

Numismatically speaking, any coin that is 50% or more thicker than a standard version qualifies as a piedfort, although some piedforts are, indeed, twice as thick as normal. Finally, the age-old question, How is the word pronounced?

" Coming from French, it is not pronounced as it is spelled; that is, don't say, "pide - fort. Rather, "pee - ay - four" (three syllables) is a good approximation. The obverse of this one ounce pure silver proof portrays the four ancient Chinese mythical creatures in ultra high, medallic relief, with the Yin and Yang symbol in the center. The legend CHINESE ANCIENT MYTHICAL CREATURES defines the theme. The reverse features Her Majesty, Queen Elizabeth II, in crowned profile facing right. This portrait, featuring Her Majesty wearing a tiara and pearl earrings, was executed by the sculptor Ian Rank-Broadley. The legend QUEEN ELIZABETH II, the date and the denomination also appear. The legend 1 OZ 999 SILVER guarantees the weight and purity. The coin is encapsulated inside a handsome black leatherette, clamshell-style presentation case, lined with black velvet and satin, and protected by a full-color outer box. An individually-numbered certificate of authenticity is included. Ing Ing Jong (obverse) Ian Rank-Broadley (reverse). The Island Nation of Tuvalu. Its nearest neighbors are Kiribati, Samoa and Fiji.

It is comprised of four reef islands and five true atolls. Its population of 11,992 makes it the third-least populated independent country in the world, with only Vatican City and Nauru having fewer inhabitants. It is also the second-smallest member by population of the United Nations. In terms of physical land size, at just 10 square miles Tuvalu is the fourth smallest country in the world, larger only than the Vatican City, Monaco and Nauru. The first inhabitants of Tuvalu were Polynesian people, who arrived about 3000 years go.

The islands came under Great Britain's sphere of influence in the late 19th century. The Ellice Islands were administered by Britain as part of a protectorate from 1892 to 1916 and as part of the Gilbert and Ellice Islands Colony from 1916 to 1974.

In 1974 the Ellice Islanders voted for separate British dependency status as Tuvalu, separating from the Gilbert Islands which became Kiribati upon independence. Tuvalu became fully independent within The Commonwealth in 1978. With Queen Elizabeth II as titular head of state. Because Tuvalu has few natural resources it has been dependent in recent years upon aid from larger, more developed nations, including Australia, New Zealand and the United States. The Perth Mint of Australia is officially commissioned by the government of Tuvalu to produce legal tender coinage for the island nation.

The seller is "talismancoins" and is located in Saint Louis, Missouri. This item can be shipped worldwide.