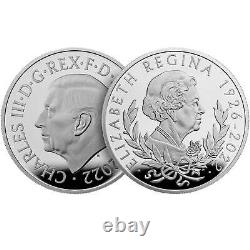 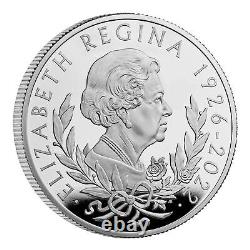 A poignant tribute to Her Late Majesty Queen Elizabeth II. Honours the longest-reigning monarch in British history. Personally approved by the monarch, the first definitive coinage portrait of His Majesty The King features on the obverse of the coin. Struck in ten ounces of 999 fine silver. Finished to the finest Proof standard.

Supplied in official Royal Mint packaging including presentation case, printed booklet exploring Queen Elizabeth II's historic legacy and certificate of authenticity. The image shows an example of the coin rather than the actual denomination and precious metal listed. This item is in the category "Coins\Coins\British\Commemorative Coins\2000s".

The seller is "rimi_99" and is located in this country: GB. This item can be shipped to United Kingdom, Canada, Japan.