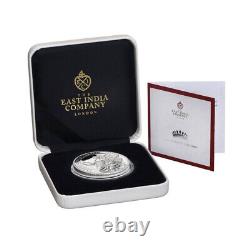 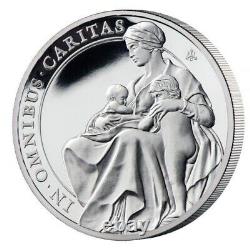 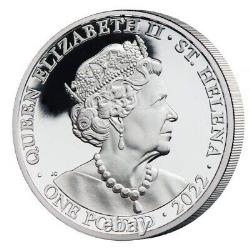 THE 2022 CHARITY 1OZ SILVER PROOF COIN. ONLY 2500 COINS AVAILABLE WORLDWIDE. THE THIRD COIN IN THE QUEEN'S VIRTUES SIX COIN COLLECTION. The third coin in our celebrated series represents Charity, a virtue based on compassion for others and a spirit of generosity. The 2022 Charity design by artist Elles Kloosterman is inspired by Thomas Brock's Victoria Memorial monument outside Buckingham Palace. The figure of Charity is represented by a seated woman who peacefully nurses a baby she holds with her right arm, while her left arm closely holds an older child who clings to her side. The design is completed by the Latin phrase. IN OMNIBUS CARITAS (In All Things Charity). This limited edition 1oz silver proof coin is presented in a bespoke case accompanied by an informative booklet and a numbered certificate which guarantees its quality and authenticity. The allegorical presentation of the Queen's six virtues was first presented on the Victoria Memorial, situated outside Buckingham Palace.

Designed after Queen Victoria's death in 1901, The Winged Angel of Victory is featured at the very top of the monument and crouched at her feet are the allegorical figures of Courage and Constancy. Beneath stand personifications of Justice, Truth and Charity. Designed and sculpted by Sir Thomas Brock, he described the symbolism of the monument as devoted to the qualities which made our Queen so great and so much beloved. This innovative and thought-provoking collection is released in tribute of the'Virtues of a Queen'.

Virtues which, in all our lives, remain as important as ever, especially during unsettled times. Issued over three years in gold and silver, the collection features the allegorical personifications of VICTORY, TRUTH, CHARITY, JUSTICE, COURAGE AND CONSTANCY. This item is in the category "Coins\Coins\British\Proof Sets/Coins\2000s". The seller is "crawleycoinsdotcodotuk" and is located in this country: GB. This item can be shipped worldwide.