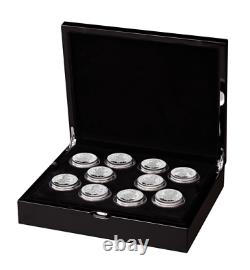 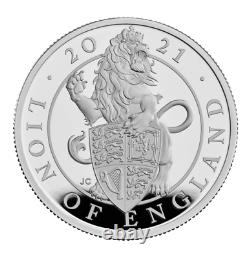 2021 Queens Beasts Two Ounce Silver Proof Ten Coin Set. The Queen's Beasts Collection. New additions in the Royal Mint's Queen's Beasts collection have been flying off the shelves since the first design was revealed in 2016.

Each of the ten coins in the much talked about series combine lifelike animals with graphic heraldic elements. The series was inspired by ten statues crafted by sculptor James Woodford that stood guard during the Queen's 1953 coronation. Featuring the real and mythological beasts that appear on the coats of arms of British royal houses, the Queen's Beasts symbolise Her Majesty's noble lineage.

Ten designs were revealed over the course of five years, all the work of The Royal Mint designer, Jody Clark. His creations were influenced by the original sculptures, studying real animals and a childhood interest in fantastic beasts. Unusually, Clark's designs feature on both sides of the Queen's Beasts coins as he is also the artist responsible for the fifth definitive coinage portrait of Elizabeth II. Fantastic Beasts And Where To Find Them.

Each of the beasts featured in this ten-coin set have a story to tell. Some are instantly recognisable, while others are more obscure. Heres a quick who's who of the creatures in the order in which they were first released on Proof coinage. The Lion of England : A symbol of courage and strength, the lion first became associated with English royalty in the middle ages, famously appearing on Richard the Lionheart's great seal: the earliest documented royal coat of arms. On the Queen's Beasts coin, the roaring king of the jungle wears a crown. The Queen's Beasts : The Lion of England - 2017 UK Quarter-Ounce Gold Proof Coin. The Unicorn of Scotland : Legend says that the Scots choose the unicorn as their emblem because the horned beast was a natural enemy of the lion: the symbol of their old enemy, the English. After the 1707 Act of Union, the unicorn joined its rival on the arms of the United Kingdom. Get this coin in gold as The Queen's Beasts : The Unicorn of Scotland - 2017 UK One Ounce Gold Proof Coin. The Queen's Beasts : The Unicorn of Scotland - 2017 UK Quarter Ounce Gold Proof Coin. The Red Dragon of Wales : The Y Ddraig Goch (red dragon) has been associated with Wales since the sixth-century. Later, during the reign of the Tudor monarchs, this snarling serpent was used as a supporter in the English Crown's coat of arms. The dragon extends a threatening talon on this and single coin options, including The Queen's Beasts : The Red Dragon of Wales - 2018 UK One Ounce Gold Proof Coin. The Black Bull of Clarence : The black bull was a symbol of the Yorkist kings, used by the likes of Edward IV and Richard III, to signify their royal descent through the bull-like Lionel of Antwerp, 1st Duke of Clarence.

The Black Bull is also available on its own as. The Queen's Beasts : The Black Bull of Clarence - 2018 UK One Ounce Gold Proof Coin.

The Queen's Beasts : The Black Bull of Clarence - 2018 UK Quarter Ounce Gold Proof Coin. The Falcon of the Plantagenets : Hunting with birds of prey was an elite sport in medieval England, so using this beast in heraldry suggested nobility and prowess.

The falcon, depicted here with its wings outstretched, was particularly associated with Edward IV and the House of York. Get this one in Gold Proof by shopping for The Queen's Beasts : The Falcon of the Plantagenets - 2019 UK Quarter Ounce Gold Proof Coin. The Yale of Beaufort : The yale became linked with the British monarchy through Henry VII's mother, Lady Margaret Beaufort, whose family used the spotted, goat-like mythological creature in their arms. This bizarre looking beast can also be found on the The Queen's Beasts : The Yale of Beaufort - 2019 UK Quarter Ounce Gold Proof Coin. The White Lion of Mortimer : Richard III, who Henry VII defeated at the Battle of Bosworth Field, claimed royal descent through another grand lady: Anne de Mortimer.

Her family's symbol, the white lion, is seen in profile on this Queen's Beasts coin and, unlike the Lion of England, this beastie is uncrowned. The White Horse of Hanover : While other creatures featured on the Queen's Beasts: Completer Coin harken back to the middle ages, the white horse trotted in during the eighteenth-century.

If you want this design in gold. Ten Two Ounce Silver Proof Coins. Each of the ten coins in the 2021 Queen's Beasts Two Ounce Silver Proof Ten Coin Set weighs in at 62.42 grams of 999 fine silver, finished to the finest proof standard. That means that the dies used to strike these coins were hand prepared, and the coin was struck slowly, multiple times, to ensure an exquisite product. Each coin in the set has a diameter of 40.00 millimetres, allowing you to view the intricate craftsmanship of each design as they were intended to be enjoyed.

S Two Ounce Silver Proof coins are also available we've got stock right now of the 2021 Queen's Beasts Completer Silver Proof Two Ounce. Various Gold Proof single issues are linked above in a variety of weights, including the remarkable The Queen's Beasts Completer 2021 Two Kilo Gold Proof. Limited Edition and Highly Collectible. This set is your chance to get hold of all the available designs in Two Ounce Silver Proof. Given the popularity of single issues, we know that these sets part of a limited edition presentation of just 350 will sell fast. Whether you have already acquired other denominations in the series or are just starting your collection, the 2021 Queen's Beasts Two Ounce Silver Proof Ten Coin Set is a great choice. Monarch: Elizabeth II (1952- present). The Britannia Coin Company of Royal Wootton Bassett is part of Gold Traders UK Ltd. We've been trading since 2008 and pride ourselves in offering market leading prices for all types of coins from Royal Mint proof & collectable sets to hammered & ancient coins. Gold Traders prides itself on honesty, integrity and ensuring the best value for customers, which has earned the company many favourable testimonials and positive press reviews too. The item "2021 Royal Mint Queens Beast's 10 Coin Silver Proof Two Ounce Set 2oz SOLD OUT" is in sale since Wednesday, June 30, 2021. This item is in the category "Coins\Coins\British\Proof Sets/Coins\2000s". The seller is "britanniacoinco" and is located in Swindon. This item can be shipped worldwide.