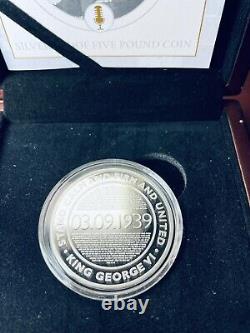 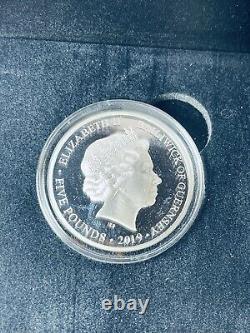 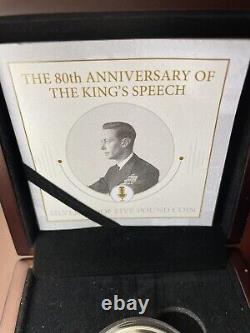 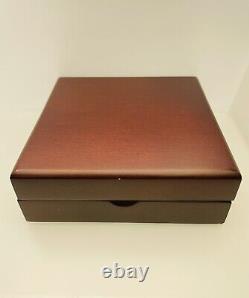 The coin has inscribed upon it the first speech of King George VI spoken on the 03.09.1939. In this grave hour, perhaps the most fateful in our history, I send to every household of my peoples, both at home and overseas, this message, spoken with the same depth of feeling for each one of you as if I were able to cross your threshold and speak to you myself. For the second time in the lives of most of us we are at war.

Over and over again we have tried to find a peaceful way out of the differences between ourselves and those who are now our enemies. But it has been in vain. We have been forced into a conflict. For we are called, with our allies, to meet the challenge of a principle which, if it were to prevail, would be fatal to any civilized order in the world. It is the principle which permits a state, in the selfish pursuit of power, to disregard its treaties and its solemn pledges; which sanctions the use of force, or threat of force, against the sovereignty and independence of other states.

Such a principle, stripped of all disguise, is surely the mere primitive doctrine that "might is right"; and if this principle were established throughout the world, the freedom of our own country and of the whole of the British Commonwealth of Nations would be in danger. But far more than this -- the peoples of the world would be kept in the bondage of fear, and all hopes of settled peace and of the security of justice and liberty among nations would be ended. This is the ultimate issue which confronts us. For the sake of all that we ourselves hold dear, and of the world order and peace, it is unthinkable that we should refuse to meet the challenge. It is to this high purpose that I now call my people at home and my peoples across the seas, who will make our cause their own. I ask them to stand calm and firm and united in this time of trial.

The task will be hard. There may be dark days ahead, and war can no longer be confined to the battlefield. But we can only do the right as we see the right, and reverently commit our cause to God. If one and all we keep resolutely faithful to it, ready for whatever service or sacrifice it may demand, then, with God's help, we shall prevail.

May He bless and keep us all. It also has the date the speech was delivered'03.09.1939' and the words'Stand Calm and Firm and United''King George VI' inscribed upon it. The other side of the coin Has Queen Elizabeth II upon it. It is a commemorative coin for the 80th Anniversary of the King's Speech. The coin has a diameter of 44.0 mm approx. (This is with the plastic case). The original box which is included with the coin measures 101.6 mm x 98.4 mm x 33.7 mm approx. The coin weighs 35.0 grams approx. This item is in the category "Coins\Coins\British\Proof Sets/Coins\2000s". The seller is "alison_chapman" and is located in this country: GB.