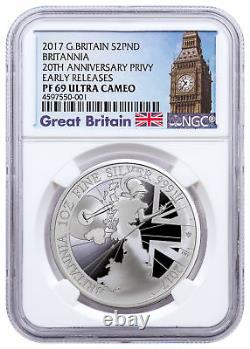 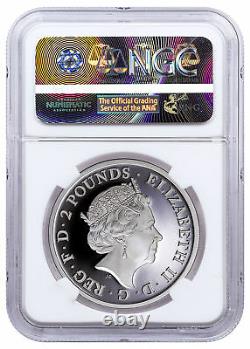 2017 Britain 1 oz Proof Silver Britannia Trident Privy NGC PF69 UC ER SKU49164. Why should this 2017 Great Britain 1 oz. Silver Britannia - 20th Anniversary with Trident Privy Proof &#######xA3;2 Coin be a part of your collection? Released by the Royal British Mint in 2017, the Silver Britannia coin is a popular staple of British coinage. Like many major bullion coins around the world, it appeals to both stackers and collectors for its iconic design and its metal content of.

This piece stands as a celebratory release as it marks the 20th anniversary of the popular silver bullion series with the Privy mark of a Trident. Featuring a contemporary take on a popular British icon. The obverse features a portrait of Queen Elizabeth II created by British Mint Engraver Jody Clark.

The reverse features a contemporary depiction of Lady Britannia she stands on a British shore this design was created by Philip Nathan as a homage to the popular icon of Britain. Graded Proof 69 with and displayed with an exclusive label. This coin was Graded Proof 69 Ultra Cameo within the first month of its issue by the Numismatic Guaranty Corporation (NGC). This grade is the second highest a coin can achieve and speaks of a well-struck, visually appealing coin, with only minor imperfections. This coin is encapsulated and adorned by a Big Ben label only available through MCM.